Can I Leave My Dog in the Car in the Winter?

You likely know about the dangers of leaving your dog unattended in a hot car. But, what about when it’s cold outside? While you might think it’s safe to park your pet during the winter months, the potential for harm, while not as high as in the summer, is still substantial. Your dog may enjoy the winter weather and colder temperatures while on walks, but dangers still remain for dogs left unattended in cars in any weather.

A car can act like a greenhouse in the summer, becoming much hotter than the environment outside. Likewise, in winter, cars without heaters running become rolling refrigerators, conducting cold from the outside. Cars have little to no insulation against outside conditions. So while your vehicle may shelter your dog from the wind and elements, it does not protect from frigid or freezing temperatures. And it’s dangerous to assume that your dog’s fur will be enough to protect it from extreme cold.

Left alone in a cold car for too long, dogs can develop hypothermia, a dangerous condition that occurs when the core body temperature drops too low. For dogs, mild hypothermia begins to set in when their temperature drops below 99 degrees Fahrenheit. Frostbite can become an issue at extreme low temperatures. If left untreated, hypothermia can also result in cardiac and respiratory failure, brain damage, coma, and even death.

Signs of Hypothermia in Dogs

Shivering and curling up for warmth are some of the first signs of mild hypothermia in dogs. Other signs to watch for, according to the USAR Veterinary Group, include the following: 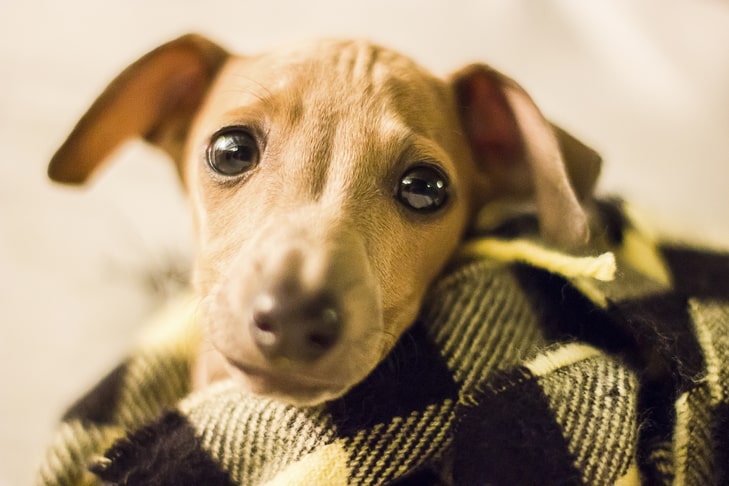 Dogs At Risk In Cold Cars

While it can be dangerous for any breed of dog to be left too long in extremely cold temperatures, some dogs tolerate the cold weather better than others. Northern breeds with thick coats, such as Alaskan Malamutes, Siberian Huskies, or Saint Bernards are bred to withstand colder climates and harsher conditions. But single-coated and short-haired breeds have a much lower tolerance for cold temperatures.

Puppies and senior dogs of any breed are also more susceptible to hypothermia, as are naturally thin breeds such as the Italian Greyhound. Small dogs and toy breeds are also less able to tolerate cold temperatures than larger breeds. Lastly, hairless breeds like the Xoloitzcuintli are especially ill-insulated against cold temperatures

Ideally, if you’ll be stopping somewhere your dog isn’t allowed, leave your dog at home, or bring a human passenger who can stay with them and keep the heater running. If you must leave your dog alone in a parked car, keep your stop as short as possible, and dress your pooch for the occasion with a coat or sweater. Provide plenty of blankets for your pup to burrow into and trap their own body heat. If you notice shivering or other signs of hypothermia starting to set in, quickly cover your dog and turn on the heat to warm them up. For more serious signs, get them to a veterinarian immediately.

Many states have laws against leaving your dog in a parked car, regardless of the season. There also exist statutes that protect anyone who breaks into your car to rescue an endangered dog. While not all states have laws that address leaving dogs in cars, some have prosecuted dog owners for parking their pets in dangerous conditions under animal cruelty laws. If your dog requires treatment for hypothermia after being left in a car, you could face criminal prosecution.

As much as your dog may love to ride in the car, you can’t take your pet everywhere you go. The risks of leaving dogs behind in a parked car are simply not worth it. Plan special outings for your car-loving dog that don’t involve stopping places where pets aren’t allowed, and save other errands for when your pup’s not with you.