GWINNETT COUNTY, Ga. — Bandit the jail dog is finally getting his forever home.

The inmate handlers, program volunteers, and deputies who know Bandit think this is the one that’s finally going to stick.

Bandit has been adopted and returned to the Gwinnett County Jail Dogs program four times — but now it looks like he will finally be free.

One falls in love with Bandit just by looking at him. He’s cute, with a sweet personality, and has a stylish wheelchair.

But he’s also a lot of work.

The people who adopted him previously loved him but just couldn’t keep up with his care. His new family knows that will not be a problem.

But for Darryl and Sue Rider, it’s not just physical.

“Looking at him the chair, his personality, you can see how you would fall in love with him, but you have to dig a little deeper than that,” Sue said.

They know Bandit needs a lot of care.

“Are we able to do this? Are we crazy to do this? But we just kept going back to him,” Darryl said. 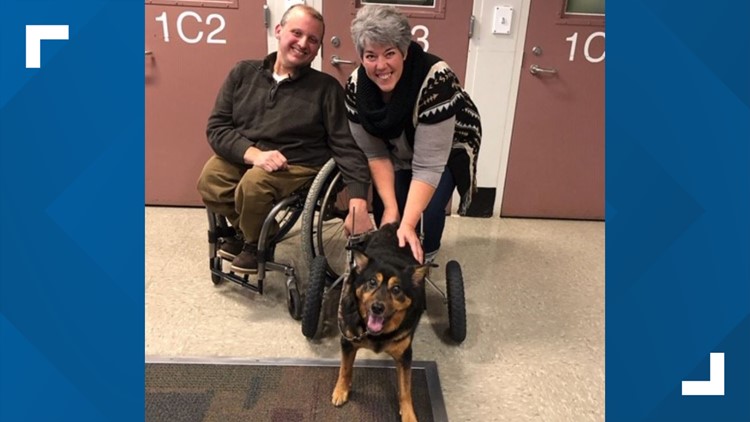 They just couldn’t leave him.

The married couple kept watching the videos of him, understanding how he would fit with their family.

“Going through what I went through in my life, life wasn’t easy. You just gotta continue to move forward,” Darryl said. “And what I heard about Bandit, the videos we saw, he has the same mindset I have.”

Bandit has given his inmate handlers the same motivation. They said watching him leave will be hard.

“It’s heartbreaking to me personally,” Brandon Tredo said. “He’s in our cell, he’s with us 24 hours a day.”

He has been with Bandit for the last four months and wakes up to him every morning.

“He’s my best friend, I’ve called my mom about her and talked to her,” Tredo said.

As bittersweet as is it, he knows Bandit is going to his forever family.

“Certainly you don’t go into something like this lightly,” Darryl Rider said.

But they just knew Bandit would be the right fit.

“I just couldn’t have asked for anything better,” Darryl said.

They plan to start a Facebook page for Bandit, so people can follow along with his new family.

9 Things You Don’t Know About a Breed You’ve Never Heard of: The Kooikerhondje

What Are the Best Dog Breeds for Introverts

A Doggy and Me Diet Book

10 Of The “Most Loyal” Dog Breeds On The Planet:

Dog Seen Outside Of Store With A Sign Around His Neck

11 thoughts on “‘He’s me’: Dog in wheelchair adopted by a man with similar paralysis”